The Australasian Journal of Logic, Special Issue on Richard Sylvan, 15(2), 2018 (with Filippo Casati and Chris Mortensen).

Reality and its Structure: Essays in Fundamentality (with Ricki Bliss), Oxford University Press, 2018. 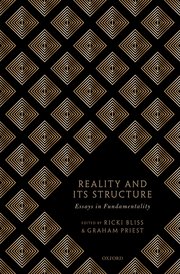 Reality is a rather large place. It contains protons, economies, headaches, sentences, smiles, asteroids, crimes, numbers, and very many other things. Much of the content of our reality appears to depend on other of its content. Economies, for example, appear to depend upon people and the way they behave, amongst other things. Some of the content of our reality also appears to be, in some significant sense, more important than other of its content. Whilst none of us would wish to deny the very important role that economies play in our lives, most of us would agree that without matter arranged certain ways in space, for example, there could be no economies in the first place.

Very many contemporary philosophers are concerned with how exactly we are to fill in the details of this view. What they are inclined to agree on is that reality has an over-arching hierarchical structure ordered by relations of metaphysical dependence, where chains of entities ordered by those dependence relations terminate in something fundamental. It is also commonly taken for granted that what those dependence chains terminate in is merely contingently existent – those things could have failed to exist – and consistent – they have no contradictory properties. This volume brings together fifteen essays from leading and emerging scholars that address these core, yet often under-explored, commitments.

Moonpaths: Ethics and Emptiness, as one of the Cowherds (eds.), Oxford University Press, 2015. 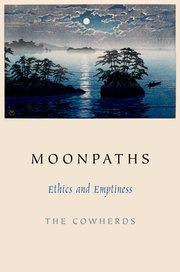 The Mahayana tradition in Buddhist philosophy is defined by its ethical orientation–the adoption of bodhicitta, the aspiration to attain awakening for the benefit of all sentient beings. And indeed, this tradition is known for its literature on ethics, which reflect the Madhyamaka tradition of philosophy, and emphasizes both the imperative to cultivate an attitude of universal care (karuna) grounded in the realization of emptiness, impermanence, independence, and the absence of any self in persons or other phenomena.This position is morally very attractive, but raises an important problem: if all phenomena, including persons and actions, are only conventionally real, can moral injunctions or principles be binding, or does the conventional status of the reality we inhabit condemn us to an ethical relativism or nihilism?

In Moonpaths, the Cowherds address an analogous problem in the domain of epistemology and argues that the Madhyamaka tradition has the resources to develop a robust account of truth and knowledge within the context of conventional reality. The essays explore a variety of ways in which to understand important Buddhist texts on ethics and Mahayana moral theory so as to make sense of the genuine force of morality. 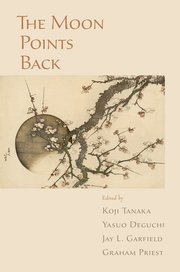 The Moon Points Back comprises essays by both established scholars in Buddhist and Western philosophy and young scholars contributing to cross-cultural philosophy. It continues the program of Pointing at the Moon (Oxford University Press, 2009), integrating the approaches and insights of contemporary logic and analytic philosophy along with those of Buddhist Studies in order to engage with Buddhist ideas in a contemporary voice. 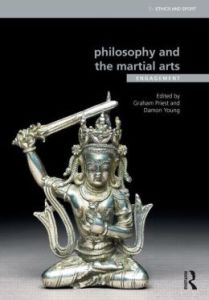 This is the first substantial academic book to lay out the philosophical terrain within the study of the martial arts and to explore the significance of this fascinating subject for contemporary philosophy.

The book is divided into three sections. The first section concerns what philosophical reflection can teach us about the martial arts, and especially the nature and value of its practice. The second section deals with the other direction of the dialectical interplay between philosophy and the martial arts: how the martial arts can inform philosophical issues important in their own right. Finally, because many of the notable martial arts are of Asian origin, there are particularly close links between the arts and Asian philosophies – and Buddhism in particular – and therefore the last section is devoted to this topic.

The essays in this collection deal with a wide range of philosophical issues: normative ethics, meta-ethics, aesthetics, phenomenology, the philosophy of mind, Ancient Greek and Buddhist thought. By demonstrating the very real nature of the engagement between the martial arts and philosophy, this book is essential reading for any serious student or scholar with an interest in the martial arts, Eastern philosophy, the philosophy of sport, or the study of physical culture. 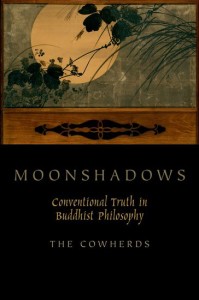 The doctrine of the two truths–a conventional truth and an ultimate truth–is central to Buddhist metaphysics and epistemology. The two truths (or two realities), the distinction between them, and the relation between them is understood variously in different Buddhist schools and is of special importance to the Madhyamaka school. The fundamental ideas are articulated with particular force by Nagarjuna (2nd–3rd century CE) who famously claims that the two truths are identical to one another, and yet distinct. One of the most influential interpretations of Nagarjuna’s difficult doctrine derives from the commentary of Candrakirti (6th century CE). While much attention has been devoted to explaining the nature of the ultimate truth in view of its special soteriological role, less has been paid to understanding the nature of conventional truth, which is often described as “deceptive,” “illusion,” or “truth for fools.” But conventional truth is nonetheless truth. This book therefore asks, “what is true about conventional truth?” and “What are the implications of an understanding of conventional truth for our lives?” 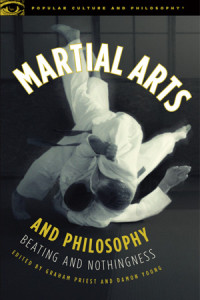 “This brilliant book reveals how a worrier can become a warrior. A unique, refreshing, no-holds-barred expression of the spirit underlying true martial arts training. I read Martial Arts and Philosophy with increasing interest and a widening smile on my face. It’s a most intriguing and uplifting read—with intellect, humor, and good spirit enlightening the reader.”

“If anyone doubts that the business of two people kicking each other in the teeth can be an art sustained by a philosophy, they should make sure that they read this extremely thought-provoking book.”

—Mark Law, author of Falling Hard: A Journey Into the World of Judo and founding editor of thefirstpost.co.uk

The Law of Non-Contradiction-that no contradiction can be true-has been a seemingly unassailable dogma since the work of Aristotle, in Book Gamma of the Metaphysics. It is an assumption challenged from a variety of angles in this collection of original papers. Twenty-three of the world’s leading experts investigate the ‘law’, considering arguments for and against it and discussing methodological issues that arise whenever we question the legitimacy of logical principles. The result is a balanced inquiry into a venerable principle of logic, one that raises questions at the very centre of logic itself.

The aim of this volume is to present a comprehensive debate about the Law of Non-Contradiction, from discussions as to how the law is to be understood, to reasons for accepting or re-thinking the law, and to issues that raise challenges to the law, such as the Liar Paradox, and a ‘dialetheic’ resolution of that paradox. One of the editors contributes an introduction which surveys the issues and serves to frame the debate.

This collection will be of interest to anyone working on philosophical logic, and to anyone who has ever wondered about the status of logical laws and about how one might proceed to mount arguments for or against them. 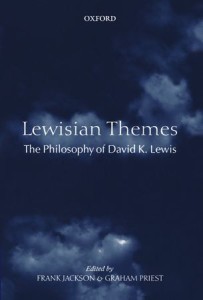 David Lewis’s untimely death on 14 October 2001 deprived the philosophical community of one of the outstanding philosophers of the 20th century. As many obituaries remarked, Lewis has an undeniable place in the history of analytical philosophy. His work defines much of the current agenda in metaphysics, philosophical logic, and the philosophy of mind and language.

This volume, an expanded edition of a special issue of the Australasian Journal of Philosophy, covers many of the topics for which Lewis was well known, including possible worlds, counterpart theory, vagueness, knowledge, probability, essence, fiction, laws, conditionals, desire and belief, and truth. Many of the papers are by very established philosophers; others are by younger scholars including many he taught. The volume also includes Lewis’s Jack Smart Lecture at the Australian National University, ‘How Many Lives has Schrödinger’s Cat?’, published here for the first time.

Australasian Journal of Philosophy 82 (1), 2004. A special issue of the AJP on David Lewis. Guest edited by Frank Jackson and David Lewis.

The notion of perversion is one that we all operate with in a variety of different contexts. We speak of fetishism as a perversion, or we speak of the course of justice as being perverted. But what does it mean to say of some person, or action, or practice, or institution, that it is perverse, a perversion, or perverts something? What sorts of things can be perverted, and why? Does the existence of perversion require things in the world to have a telos or nature? Is any particular theory of morality necessary to make sense of the notion? Which sexual acts are perverted and why? And are sexual perversions sui generis, or do they fall under a general account of perversion? This issue of The Monist welcomes papers that address the above, and related, issues. The aim is to cast light on this important but relatively neglected aspect of the human world.

Richard Sylvan died in 1996, he had made contributions to many areas of philosophy, such as, relevant and paraconsistent logic, Meinongianism and metaphysics and environmental ethics. One of his trademarks was the taking up of unpopular views and defending them. To Richard Sylvan ideas were important, wether they were his or not. This is a book of ideas, based on a collection of work found after his death, a chance for readers to see his vision of his projects. 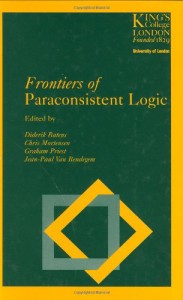 Paraconsistent logic is one of the most important and challenging developments in modern logic. Many of the papers in the book are by those who have already made significant advances in the subject. It is unlikely that so many of the founders of this subject will be gathered together again. The work is at the cutting edge of this rapidly advancing subject. Paraconsistent logic, logic in which inconsistent information does not deliver arbitrary conclusions, is one of the fastest growing areas of logic, with roots in profound philosophical issues, and applications in information processing and philosophy of science. This book contains selected, edited papers presented at the First World Congress on Paraconsistency, held in Ghent in 1997; a milestone event in the subject. The book will be invaluable to all who want to learn what the subject is, and where it is currently going. 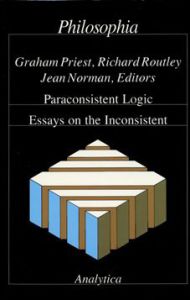 Paraconsistent logic is a branch of logic which concerns the logical structure of inconsistent situations. Though the subject has roots which spread back through the history of philosophy, in its modern form it is barely thirty years old. It is, therefore, still in a young and rapidly developing state. Orthodox logical theory presupposes that there are no inconsistent situations in any important sense. This is a view which also underpins much traditional metaphysics and epistemology. Paraconsistency rejects this view and, therefore, poses a radical challenge to orthodox logic and much orthodox philosophy. It is, therefore, potentially a development of singular importance. This book brings together a collection of essays by most of the leading workers in the field of paraconsistency.  All of the essays are previously unpublished and many are undoubtedly of first importance for the subject. However, since the subject is a novel and, therefore, an unfamiliar one, the authors have included substantial introductory essays which explain the current state of the discipline, explore its historical roots and philosophical implications and survey the prospects for future research in the area. Most of the published work in paraconsistency  is written for the initiate, concentrates on a small aspect of it, and is spread out over numerous journals. This book therefore provides fort he first time a focal point for research on the subject which will be invaluable to both the novice and the initiate alike.